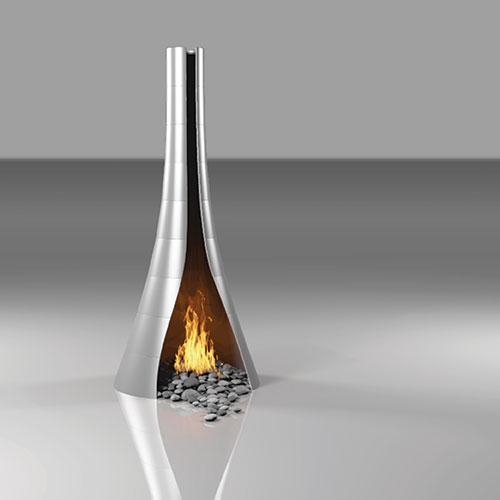 A cantilevered corten steel arc installed at SteelStacks, Bethlehem, PA. Commissioned by ArtsQuest in conjunction with The National Endowment for the Arts Placemaking Initiative. The ‘Bridge' Fire Feature represents a physical and spiritual arc between Bethlehem Steel’s past production of the country’s most noted steel spans, and the future of the site as a revitalised cultural mecca. The Bridge as a tactile metaphor is fitting for the 21st Century Town Square site, which will now act as a bridge between the industry of the past and the art of the future. Pointed in the direction of the once continually burning, iconic blue flames that indicated steel was being poured, a thin blue line of flame, running the length of the arc, acts as a torch lighting the mill’s familiar burners. Beginning eight feet up, out of the reach of the public, a slot in the structure houses a specially designed burner, allowing the flame to be viewed from underneath as well as from above. The flame begins invisibly, then rises incrementally to the full height of eighteen inches at the top of the arc, diminishing to nothing at the tip. The burner is lit using a reliable, exterior-rated electronic ignition system, the controls of which are housed within the base of the sculpture, out of sight and reach of the public. The Bridge in corten steel at SteelStacks Bethlehem Campus. ArtsQuest & NEA grant recipient.