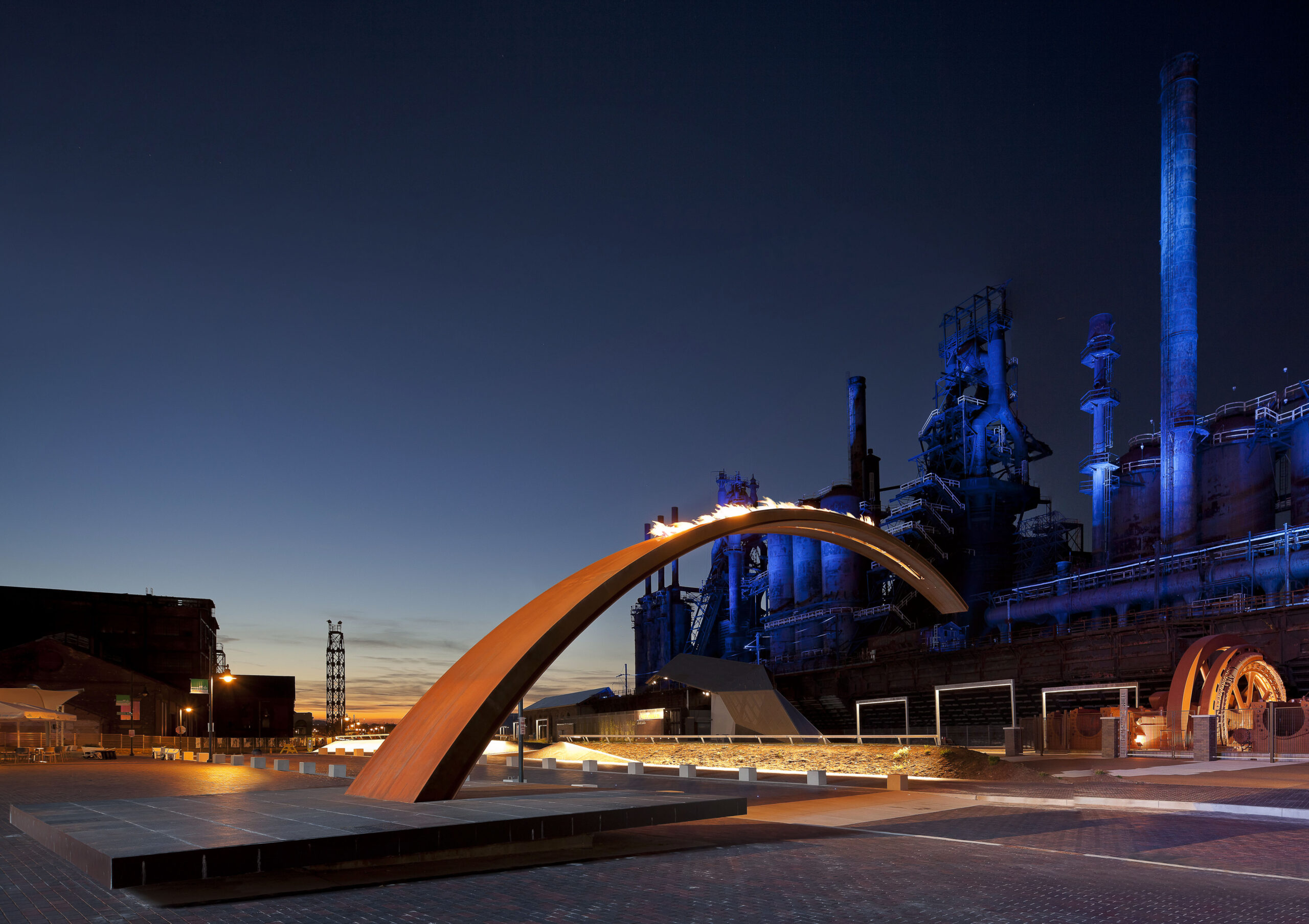 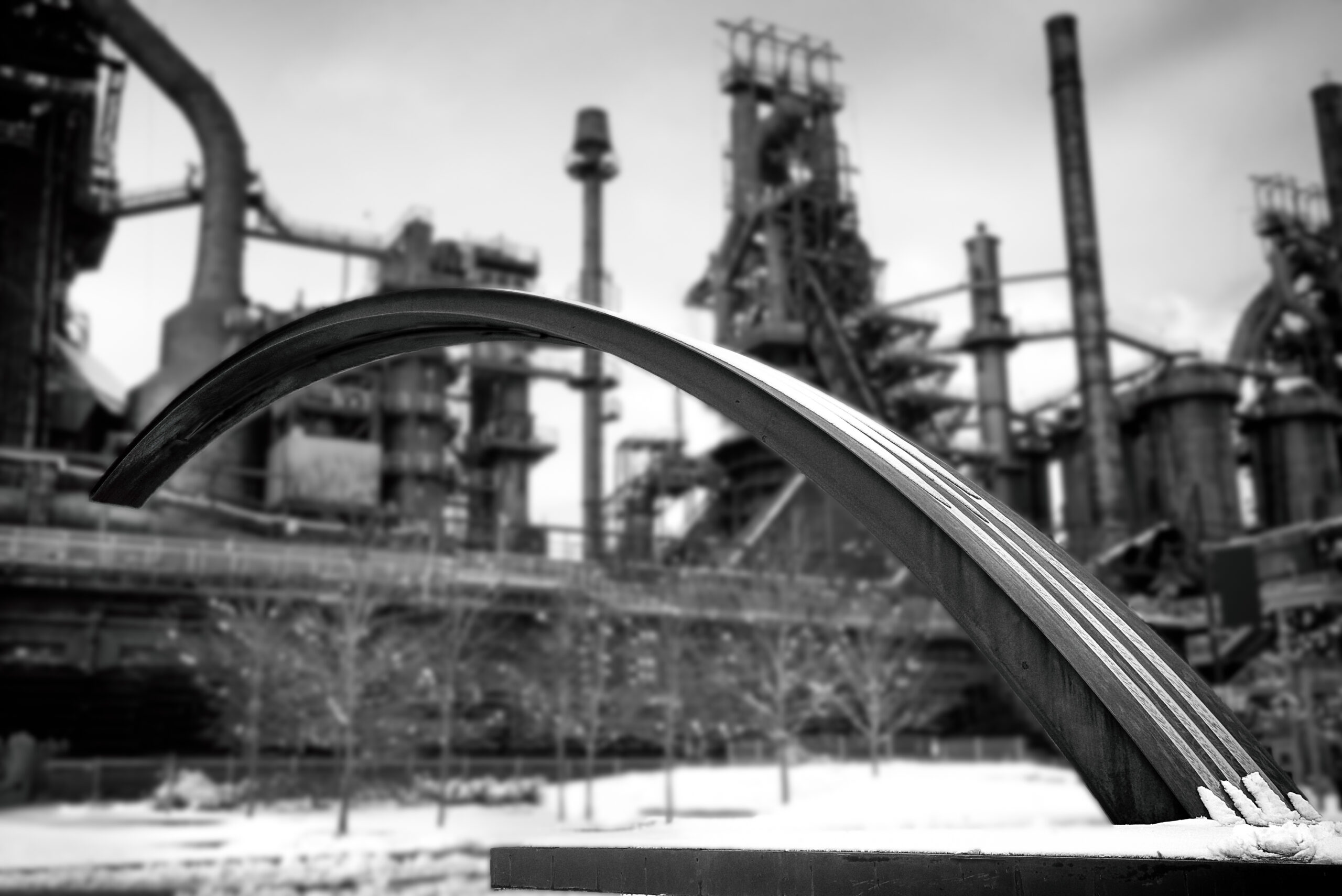 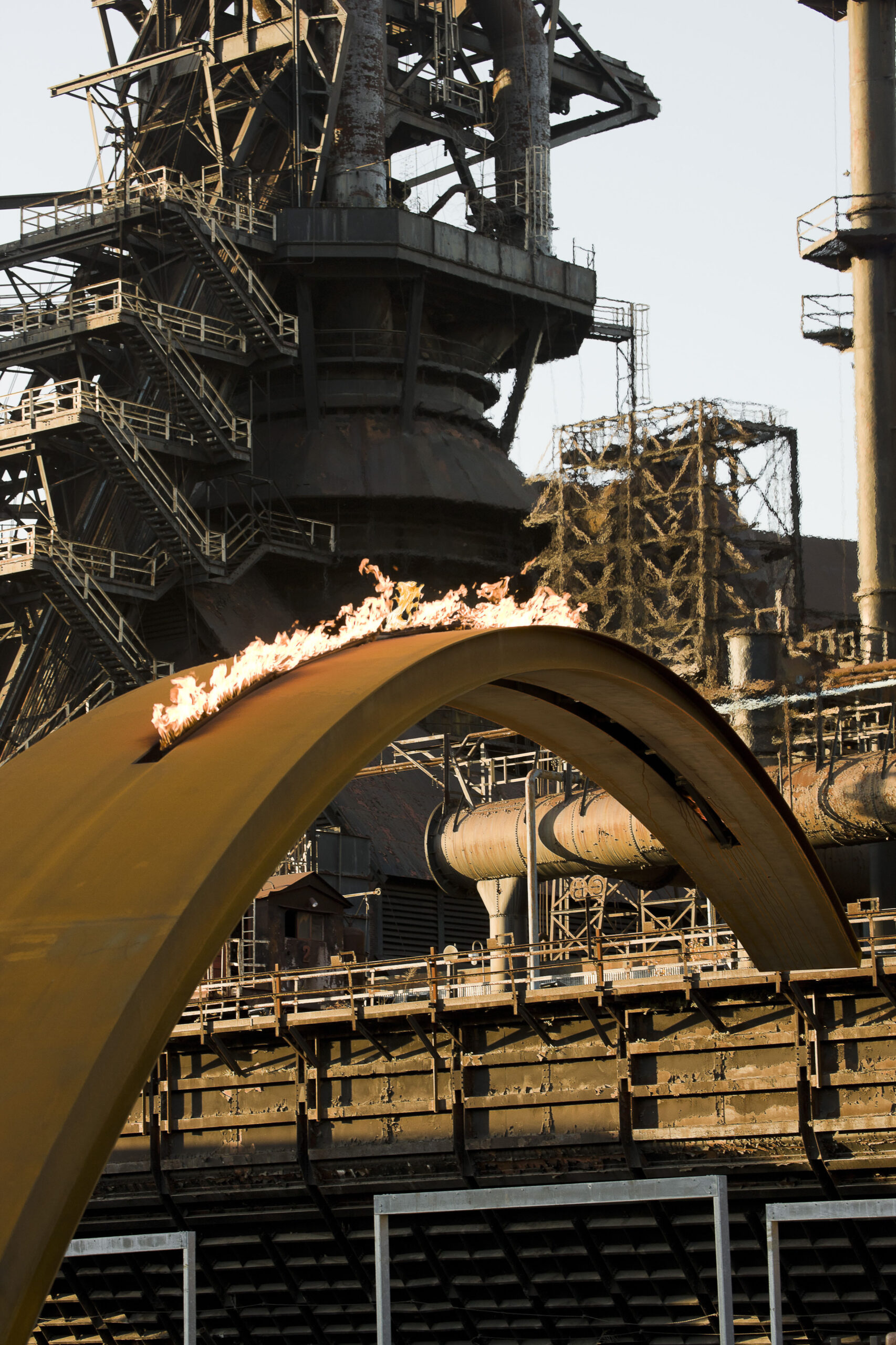 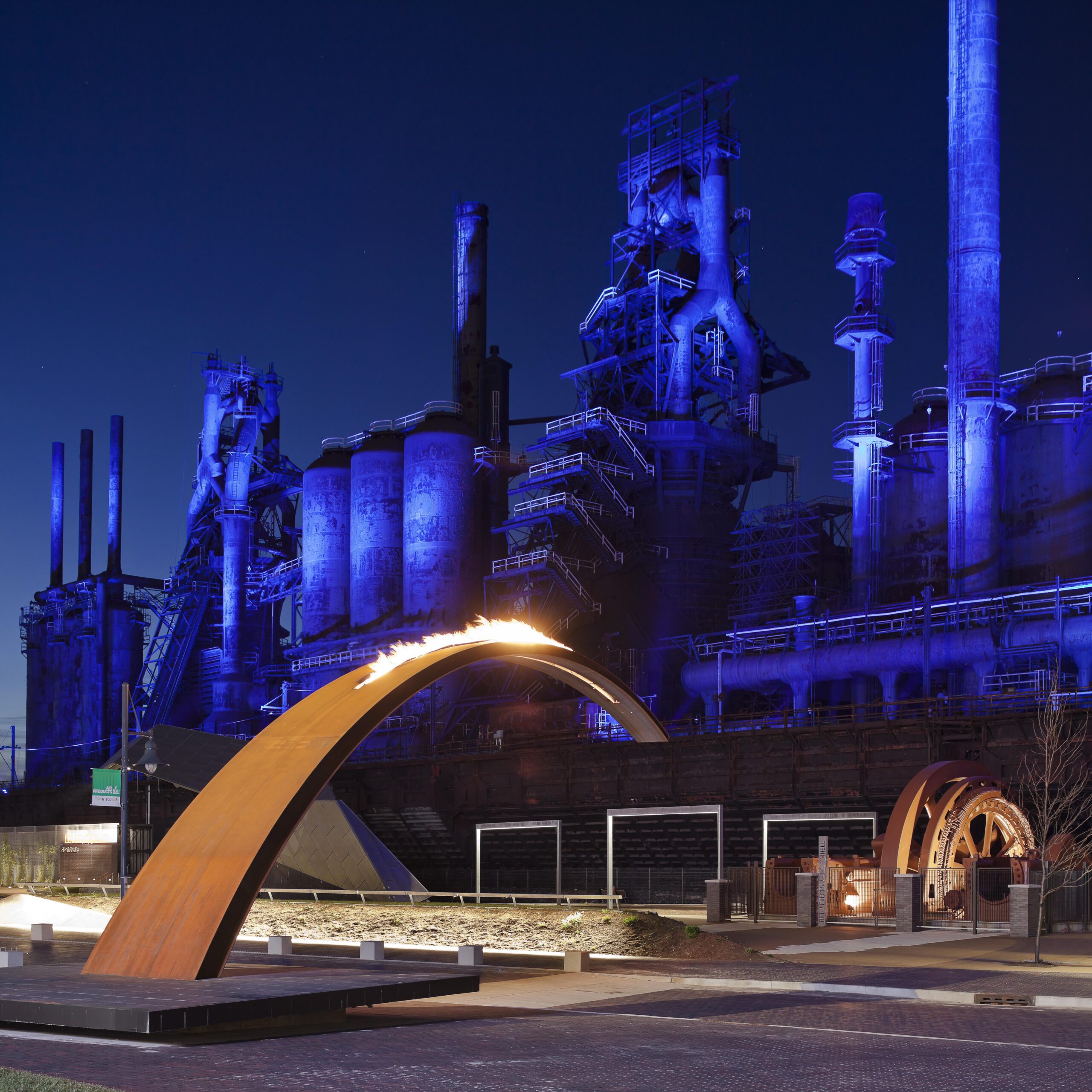 A 35 ton cantilevered corten steel arc installed at SteelStacks, Bethlehem, PA. Commissioned by Jeffrey Parks of ArtsQuest in conjunction with The National Endowment for the Arts Placemaking Initiative. The structure was engineered by BuroHappold Engineers in NYC and built of American made Cor-Ten Steel and installed by Amthor Steel, Erie PA. The job was supervised by John Raymond for ArtsQuest, Bethlehem PA.

Ms Colombo won the ArtsQuest RFP in November of 2010 to design an outdoor fire sculpture situated in front of the Bethlehem Steel Blast Furnace in the center of SteelStacks Town Square. The installation was fast tracked to July of 2011 and is now a destination in itself within the larger destination of the Town Square.

Spanning the roadway of a burgeoning arts destination, this elegant, immense work is the anchor for the revitalization of the western portion of the former Bethlehem Steel plant, directly in the heart of the City of Bethlehem. The Bridge Fire Feature represents a physical and spiritual arc between Bethlehem Steel’s past production of the country’s most noted steel spans, and the future of the site as a revitalised cultural mecca.

Pointed in the direction of the once continually burning, iconic blue flames that indicated steel was being poured, a thin blue line of flame, running the length of the arc, acts as a torch lighting the mill’s familiar burners. Beginning eight feet up, out of the reach of the public, a slot in the structure houses a specially designed burner, allowing the flame to be viewed from underneath as well as from above.

The flame begins invisibly, then rises incrementally to the full height of eighteen inches at the top of the arc, diminishing to nothing at the tip. The burner is lit using a reliable, exterior rated manual pilot ignition system, the controls of which are housed within the base of the sculpture, out of sight and reach of the public.

The structural support of the Bridge utilizes four, custom fabricated, wide flange “Bethlehem Beams”, which diminish in height from the base to the tip. Thus, the mass of the sculpture diminishes as it points skyward, as does the height of the flame, creating an optical illusion of a much longer structure that disappears into space.

The engineering of the piece also advances the structure into the 21st century by evolving the classic I-Beam to a tapered design that can invisibly support the thin, cantilevered structure.

It was proposed, but not executed, to inscribe the names and completion dates of Bethlehem Steel’s most prominent projects, chronologically from the base of the piece to the tip and back. Visitors would be encouraged to touch the text, make rubbings, and understand the monumental contribution Bethlehem Steel has made to the industrial advancement of the country. 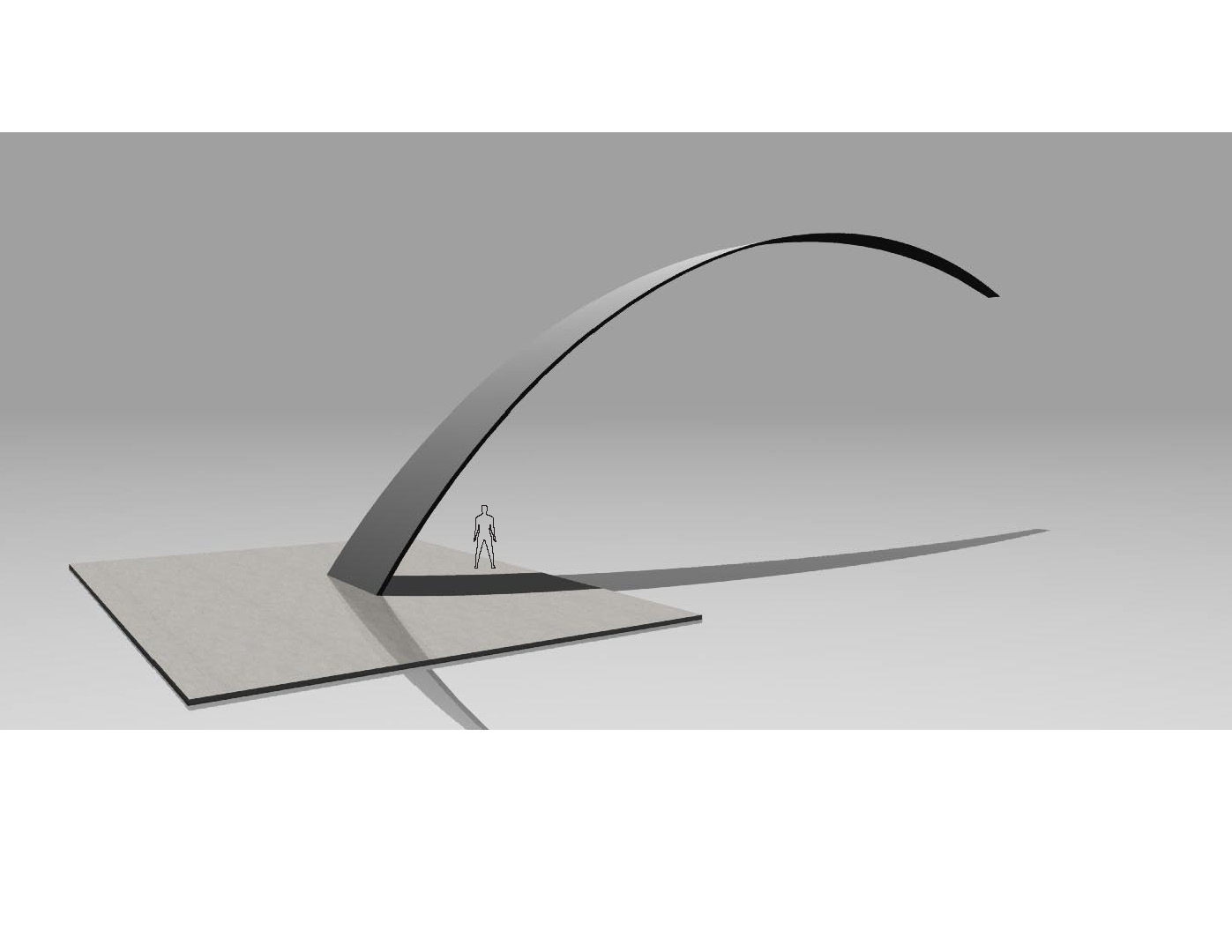 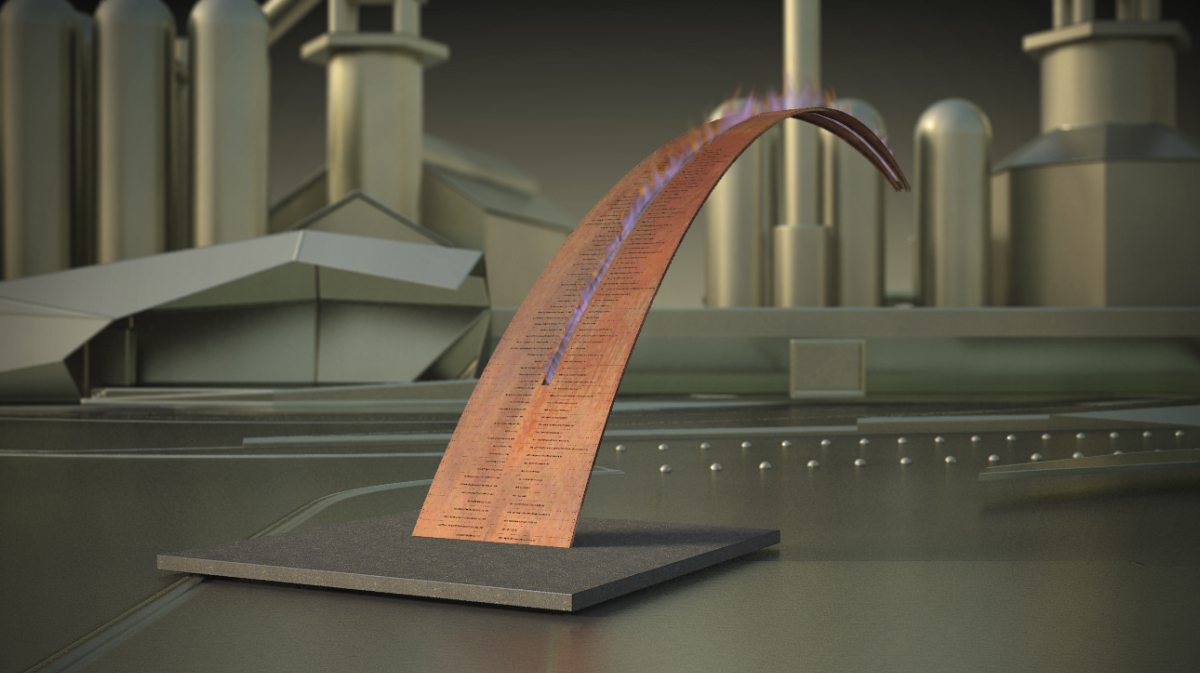 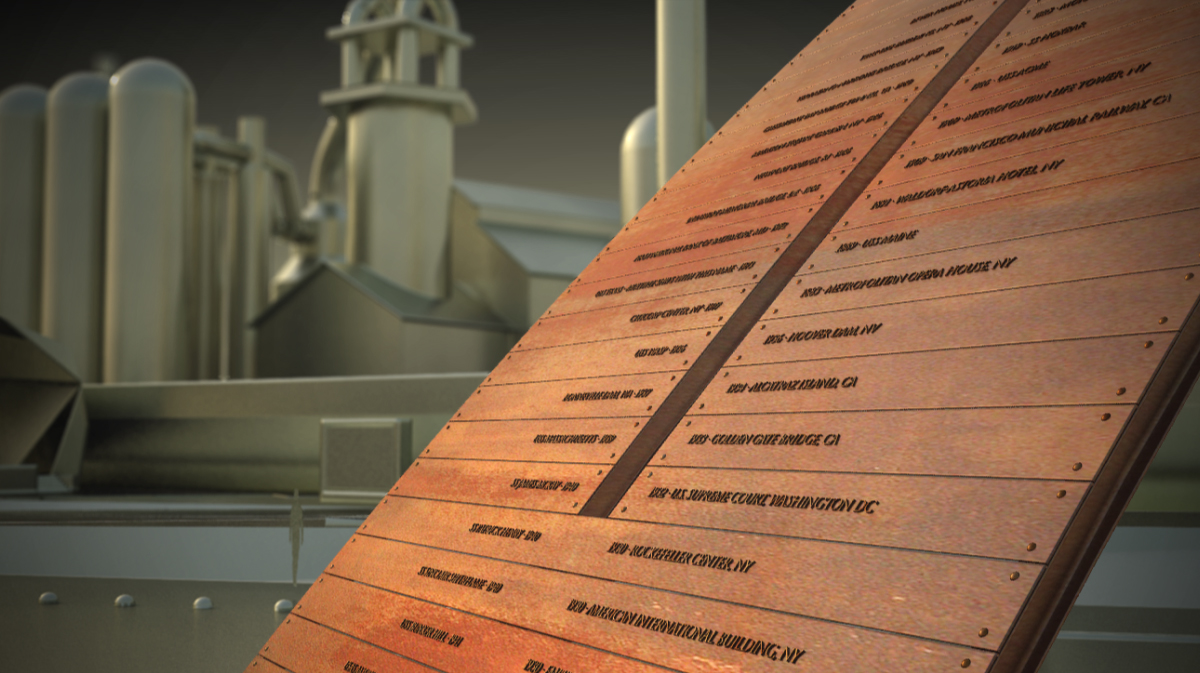 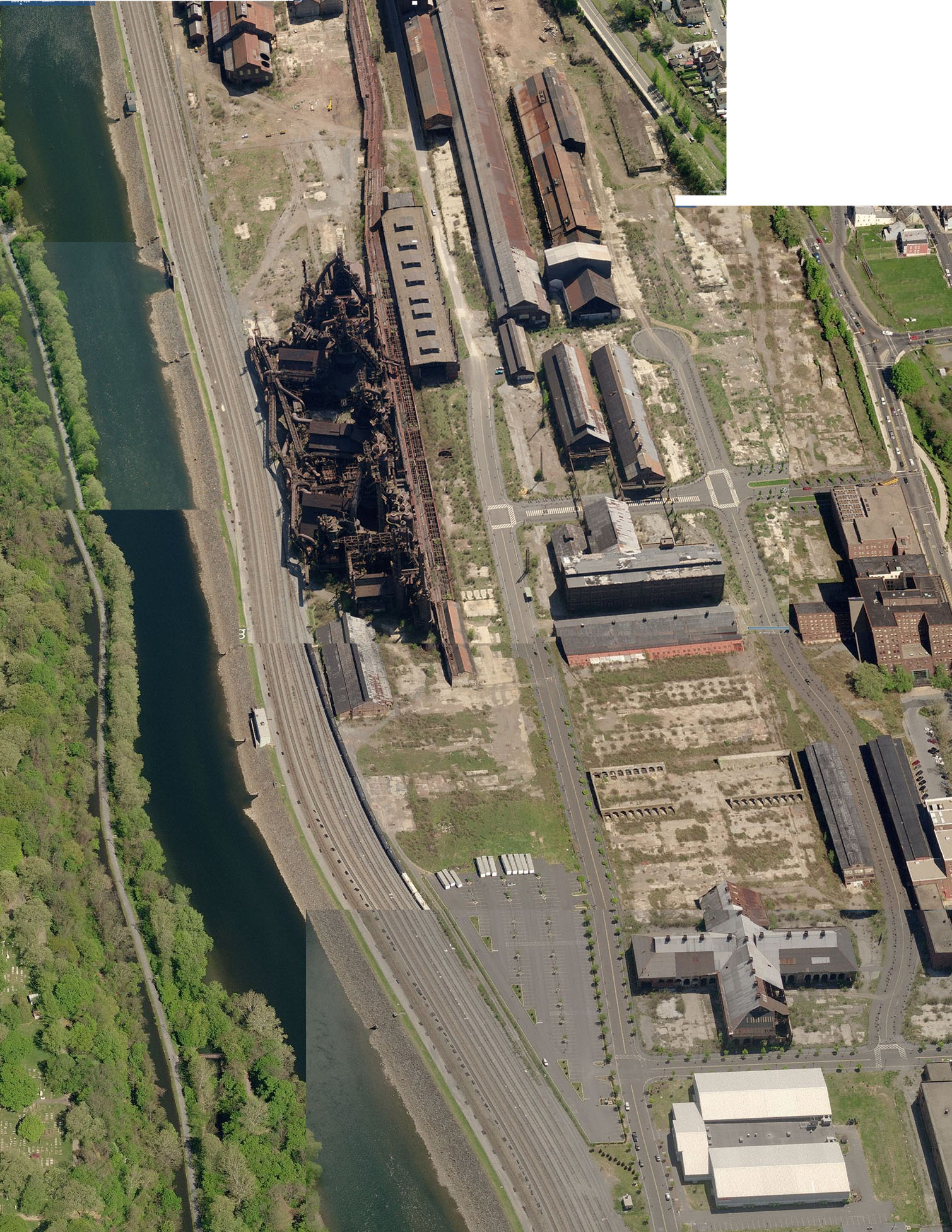 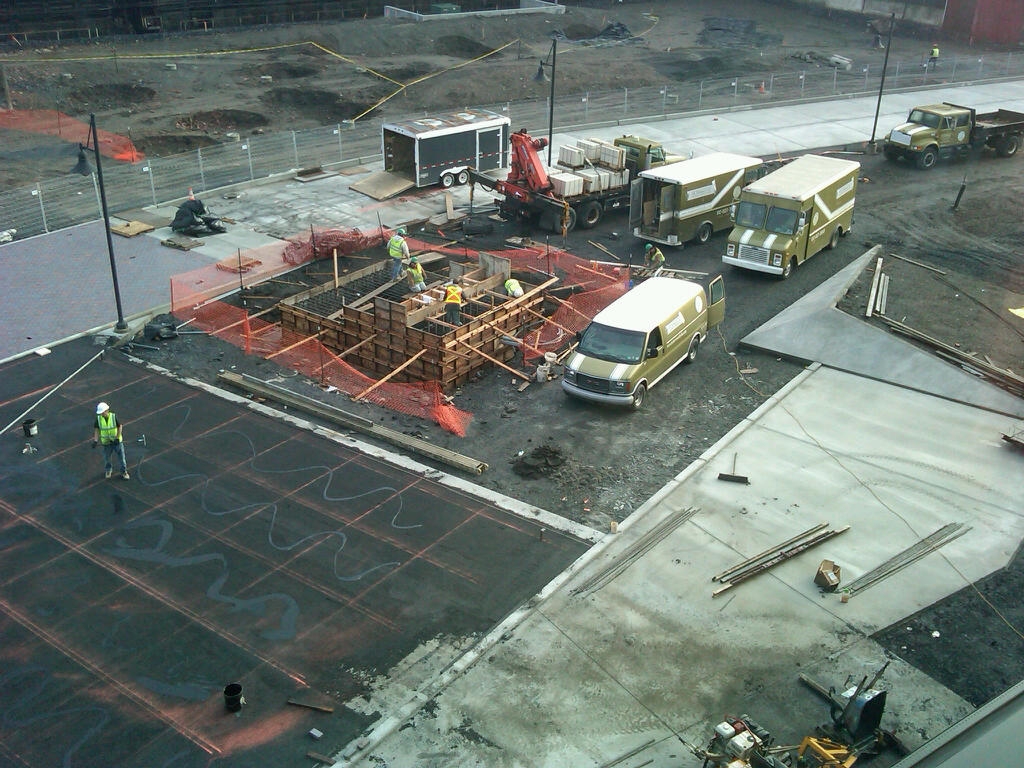 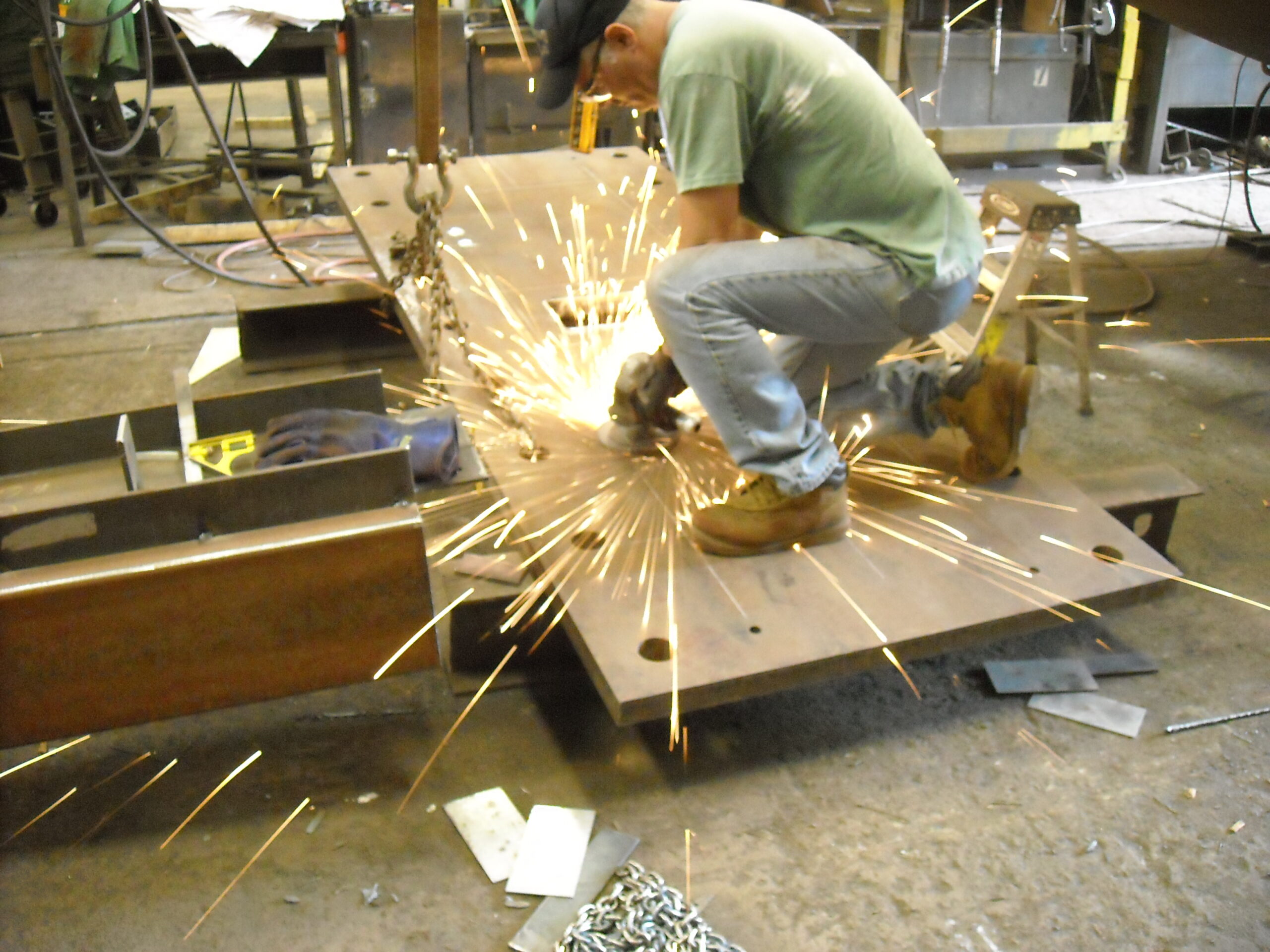 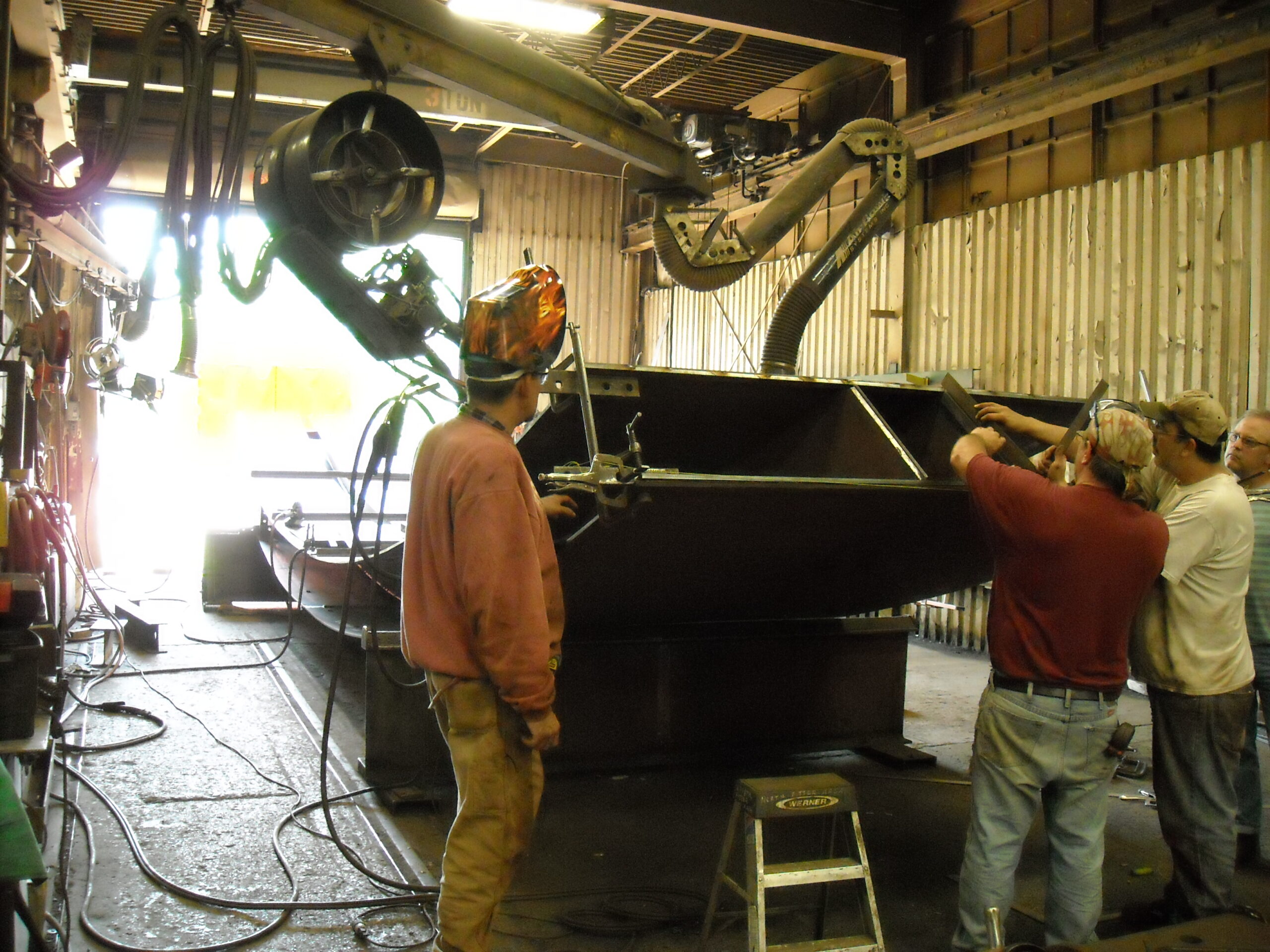 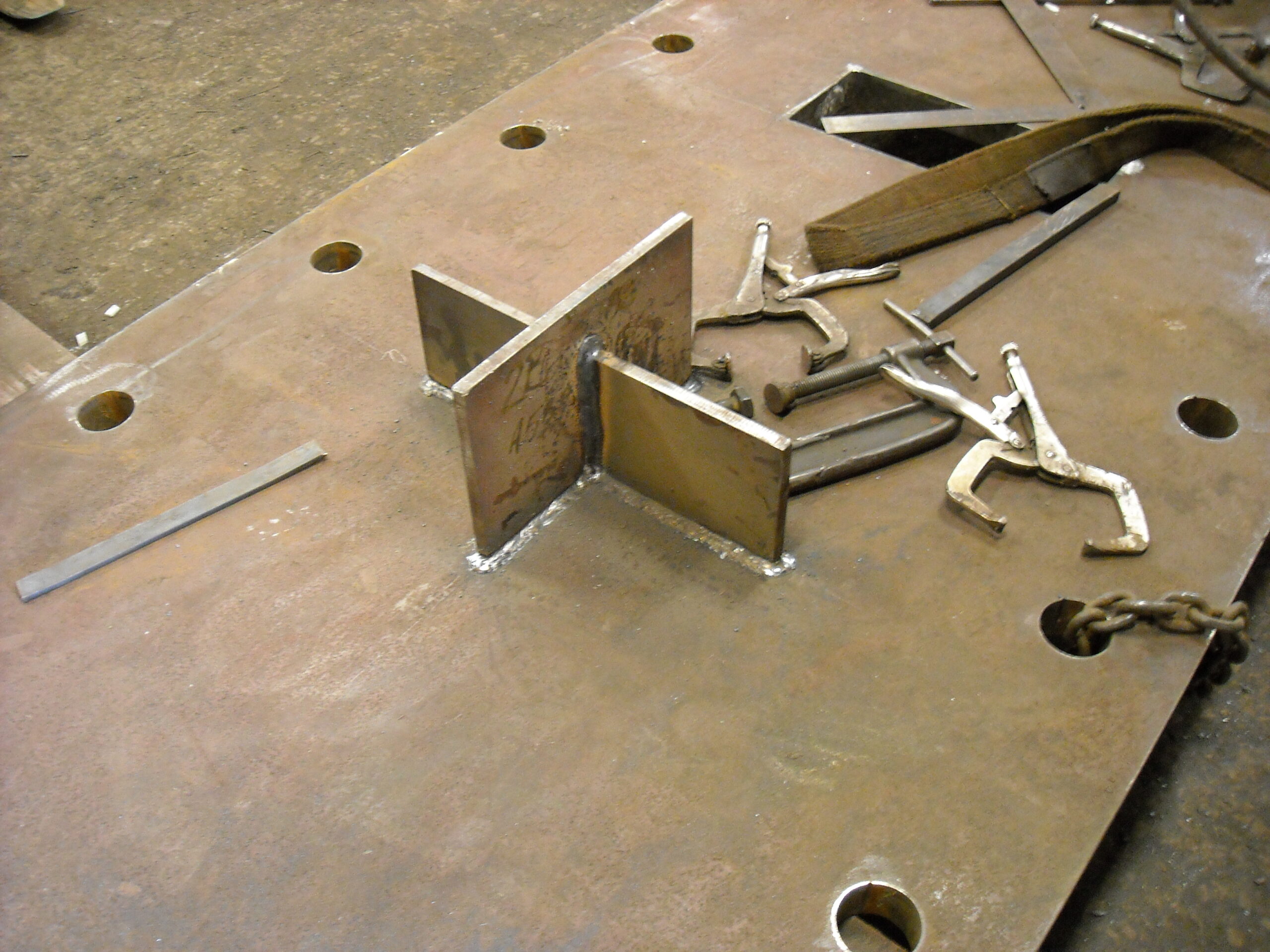 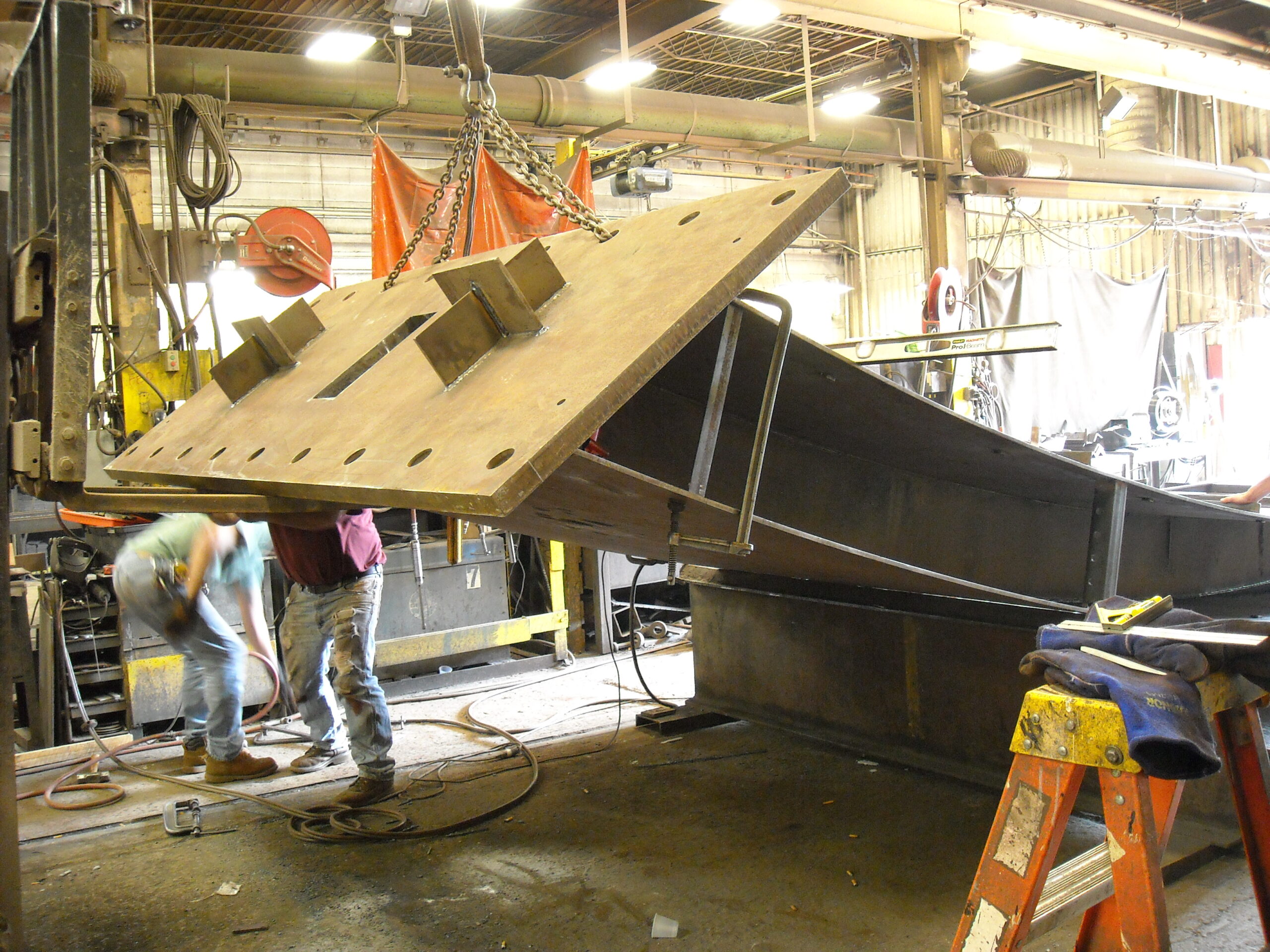 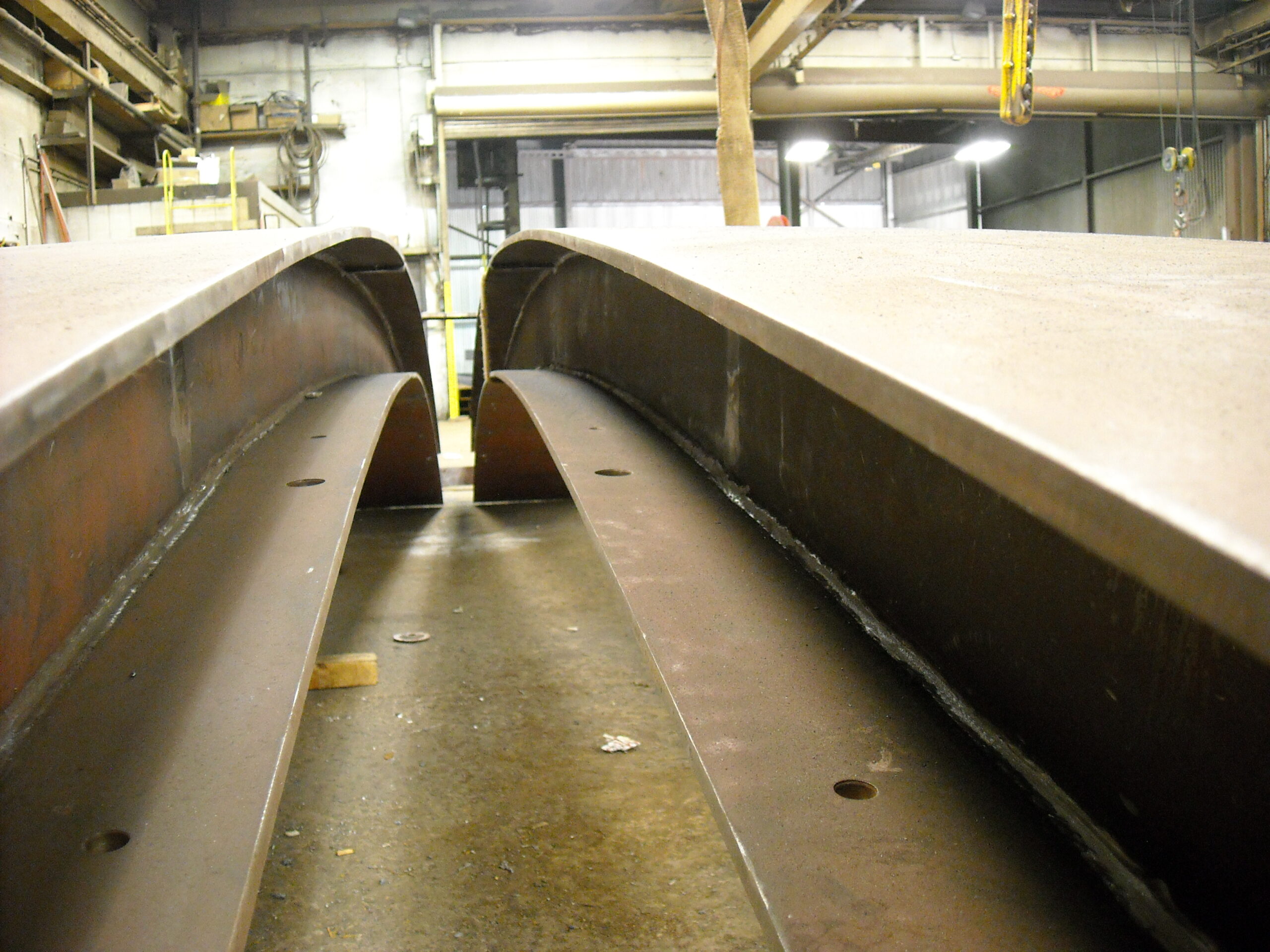 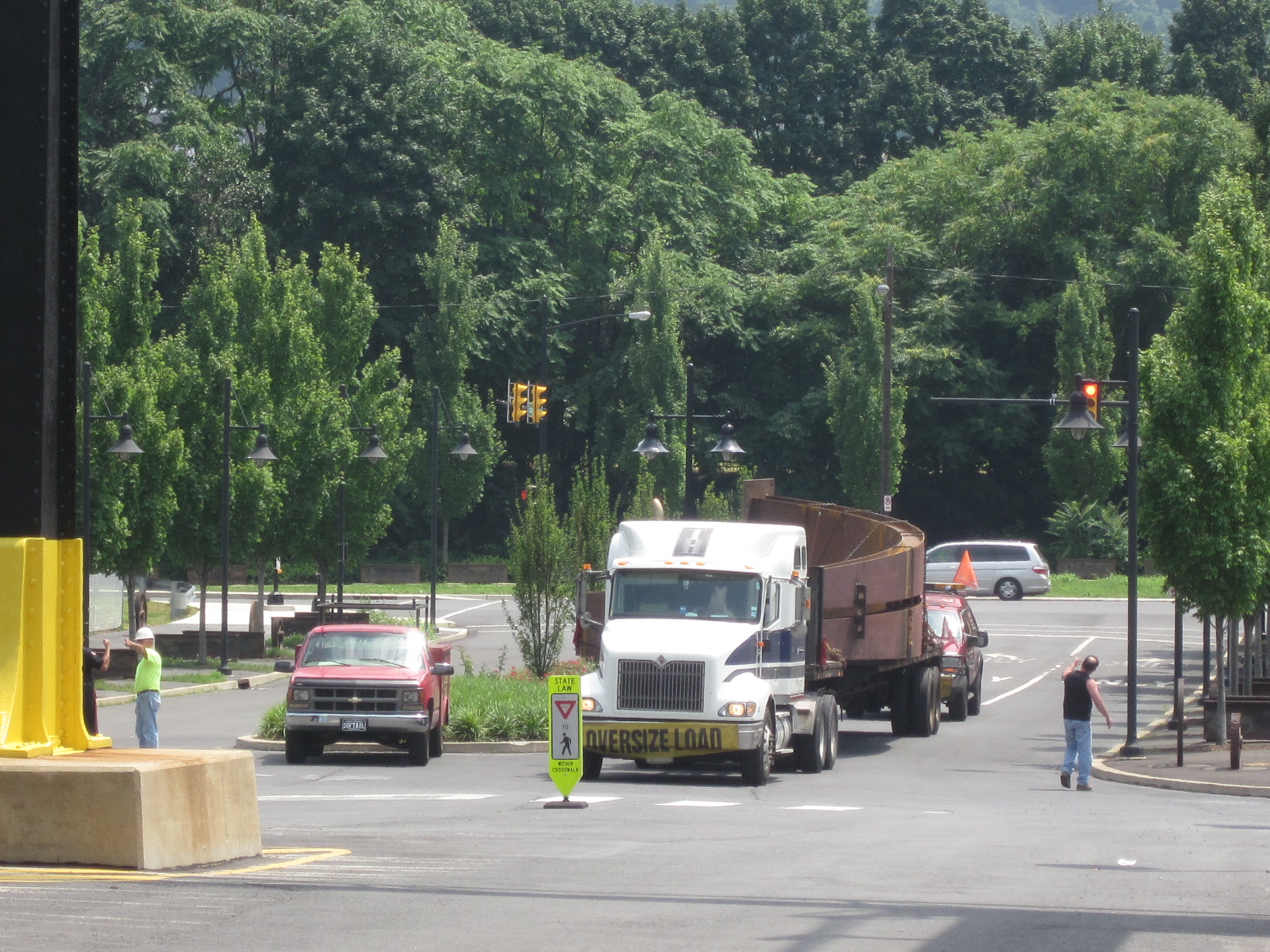 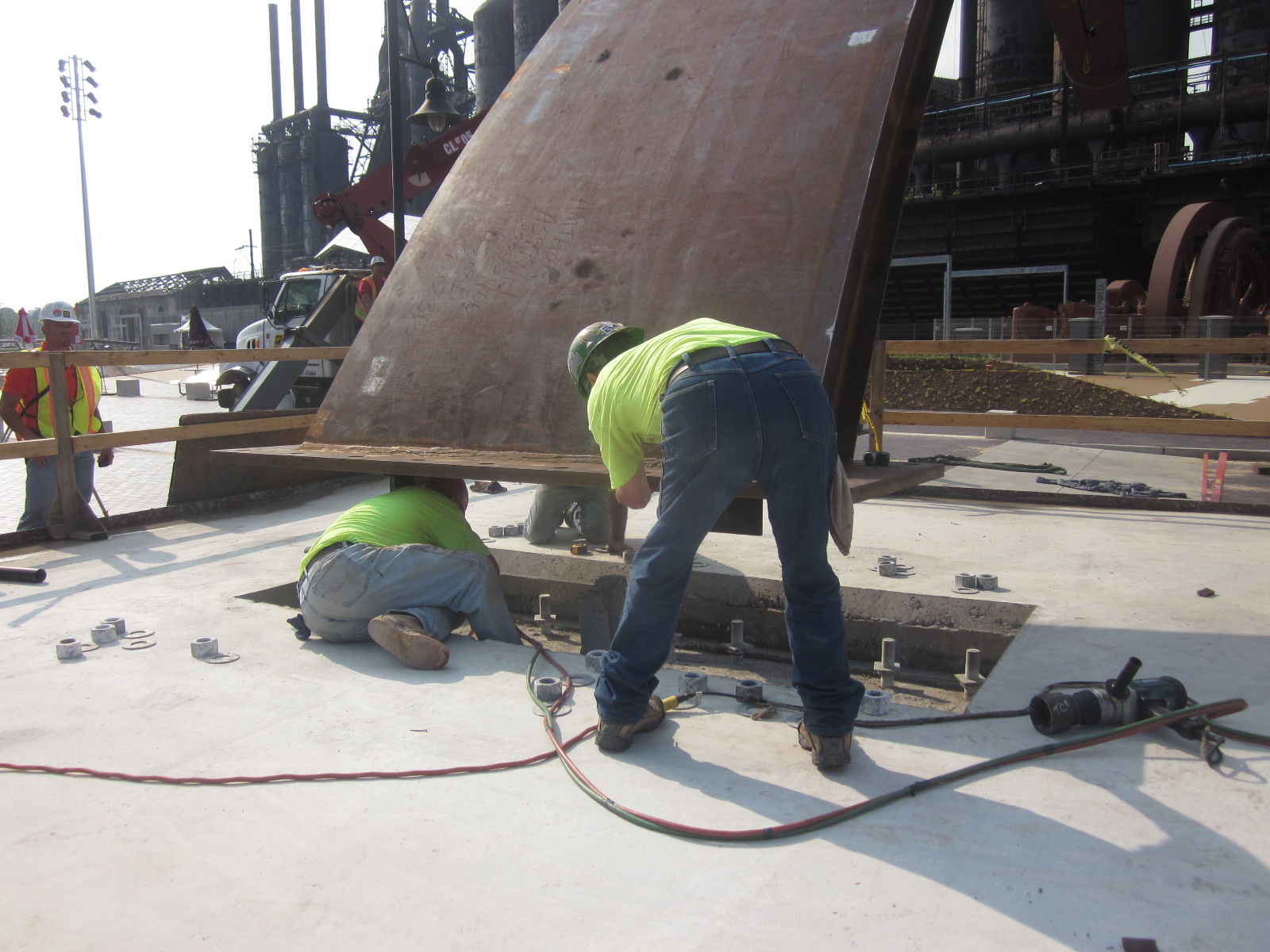 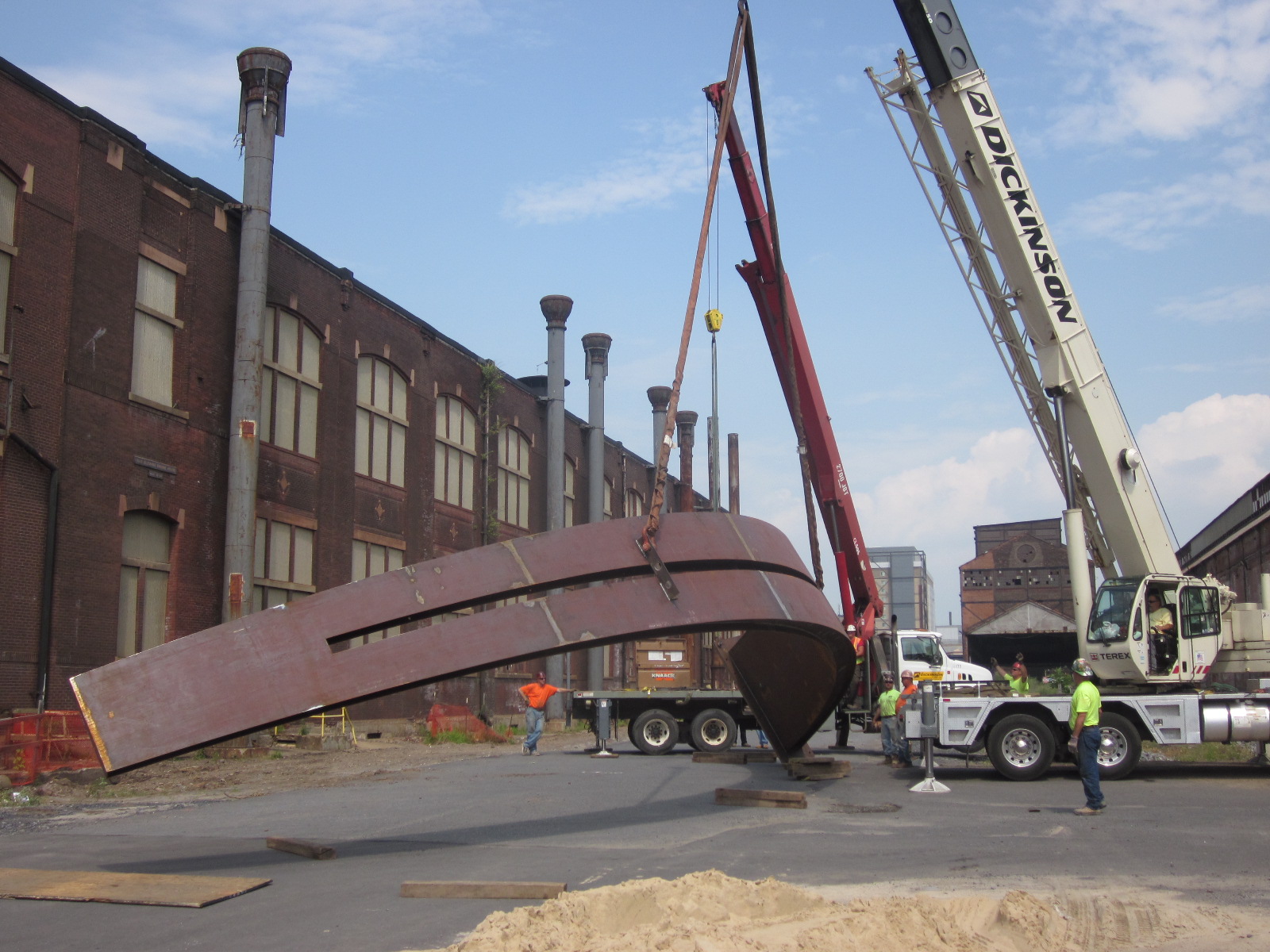 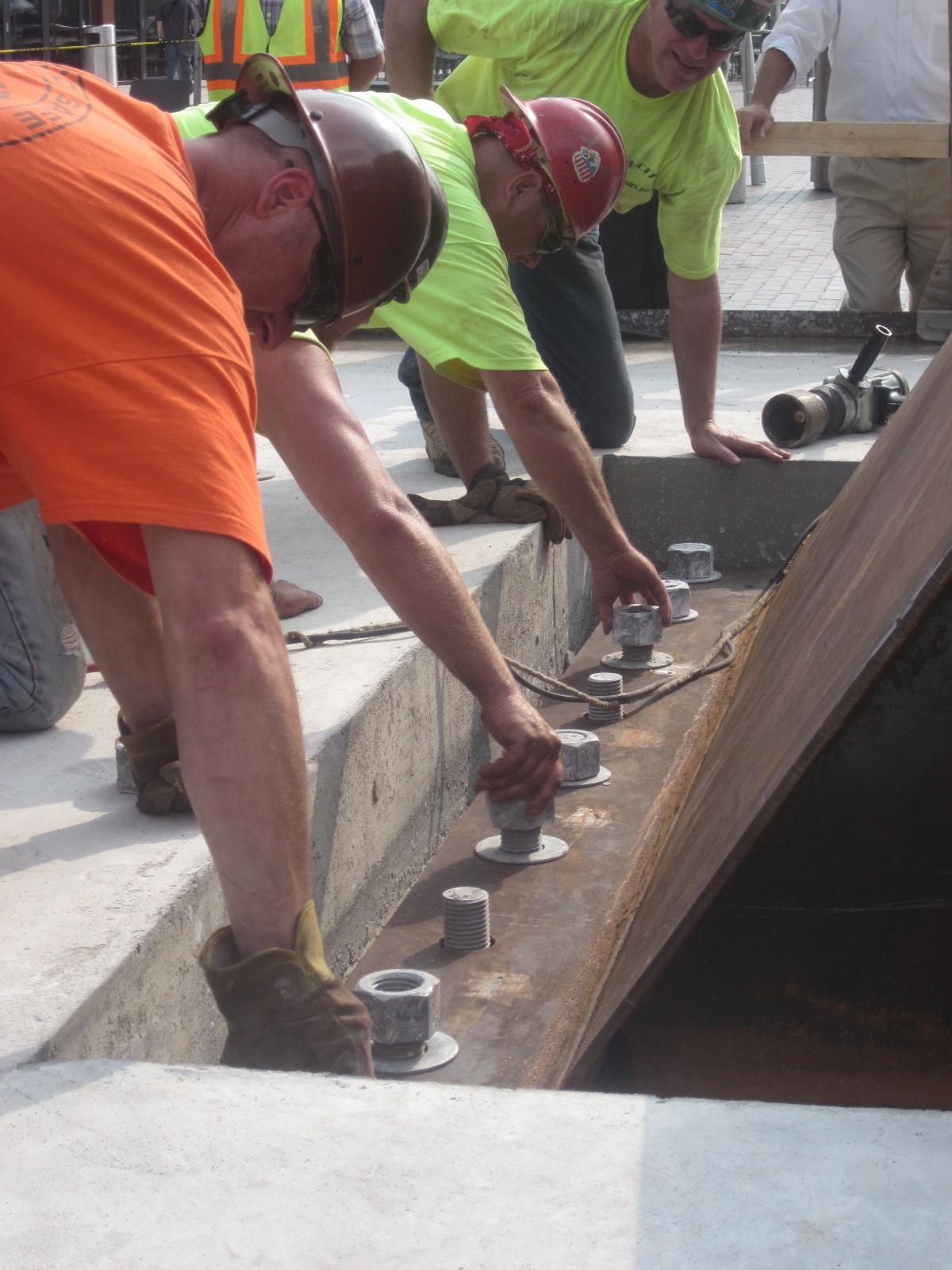 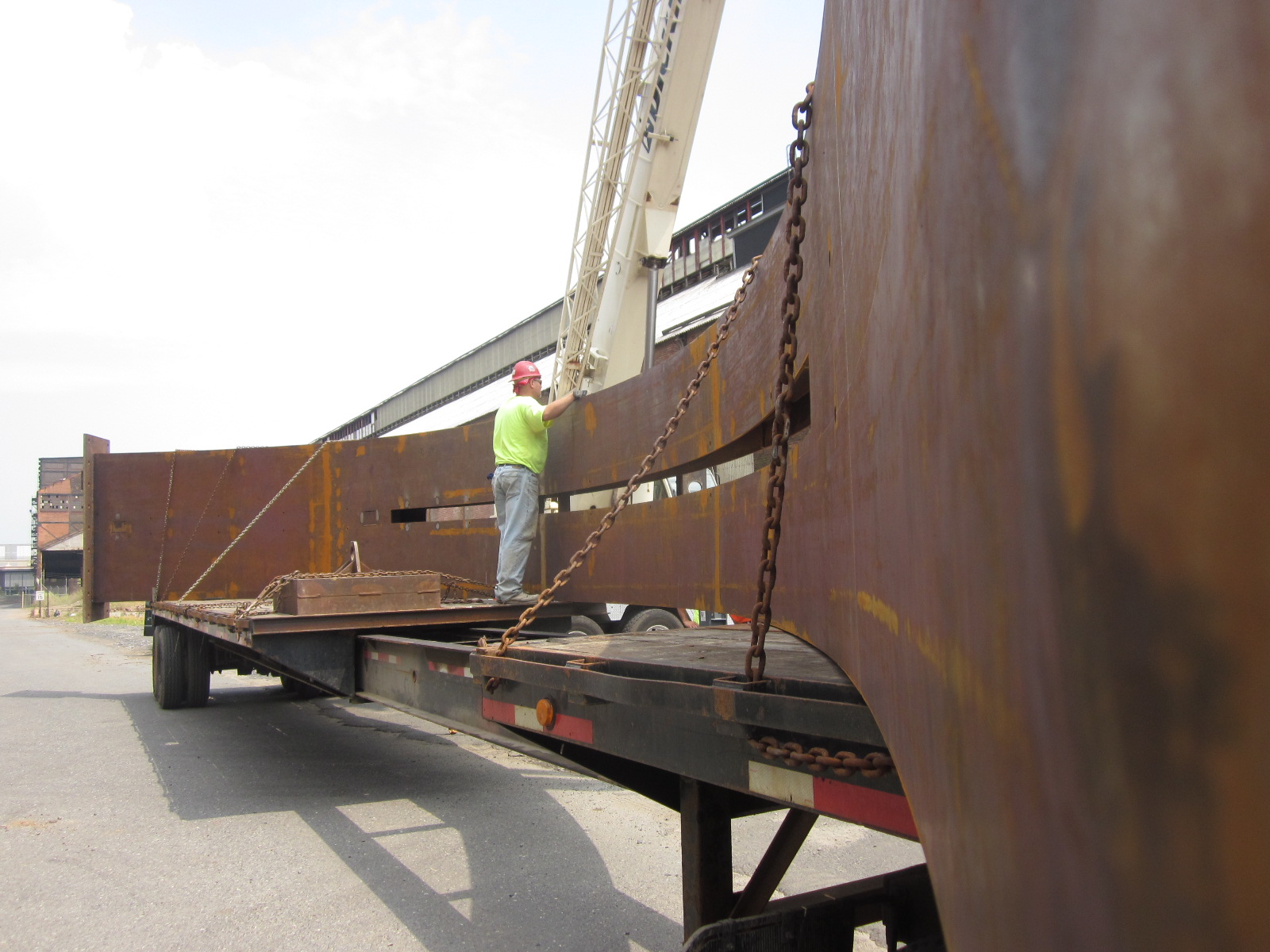 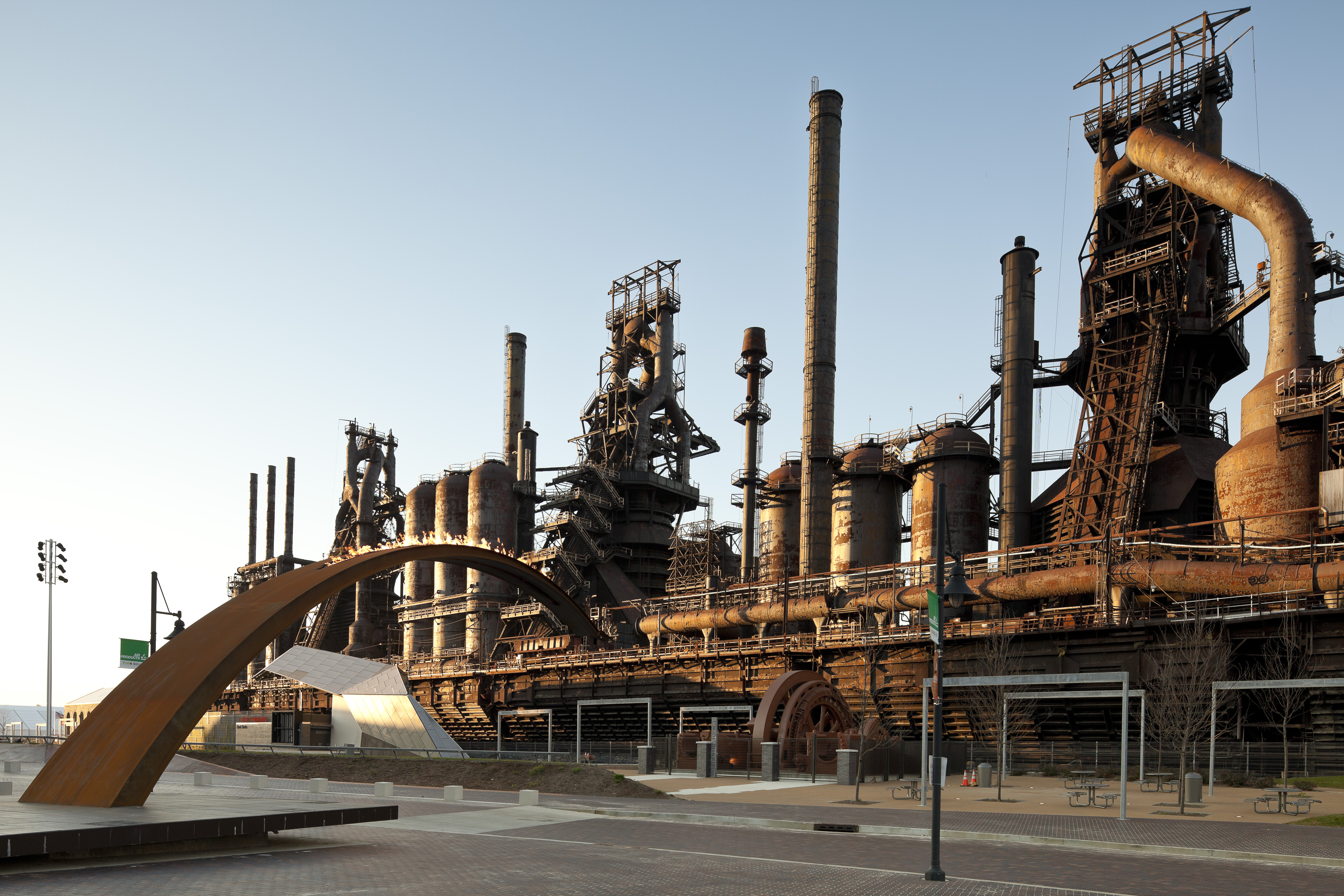 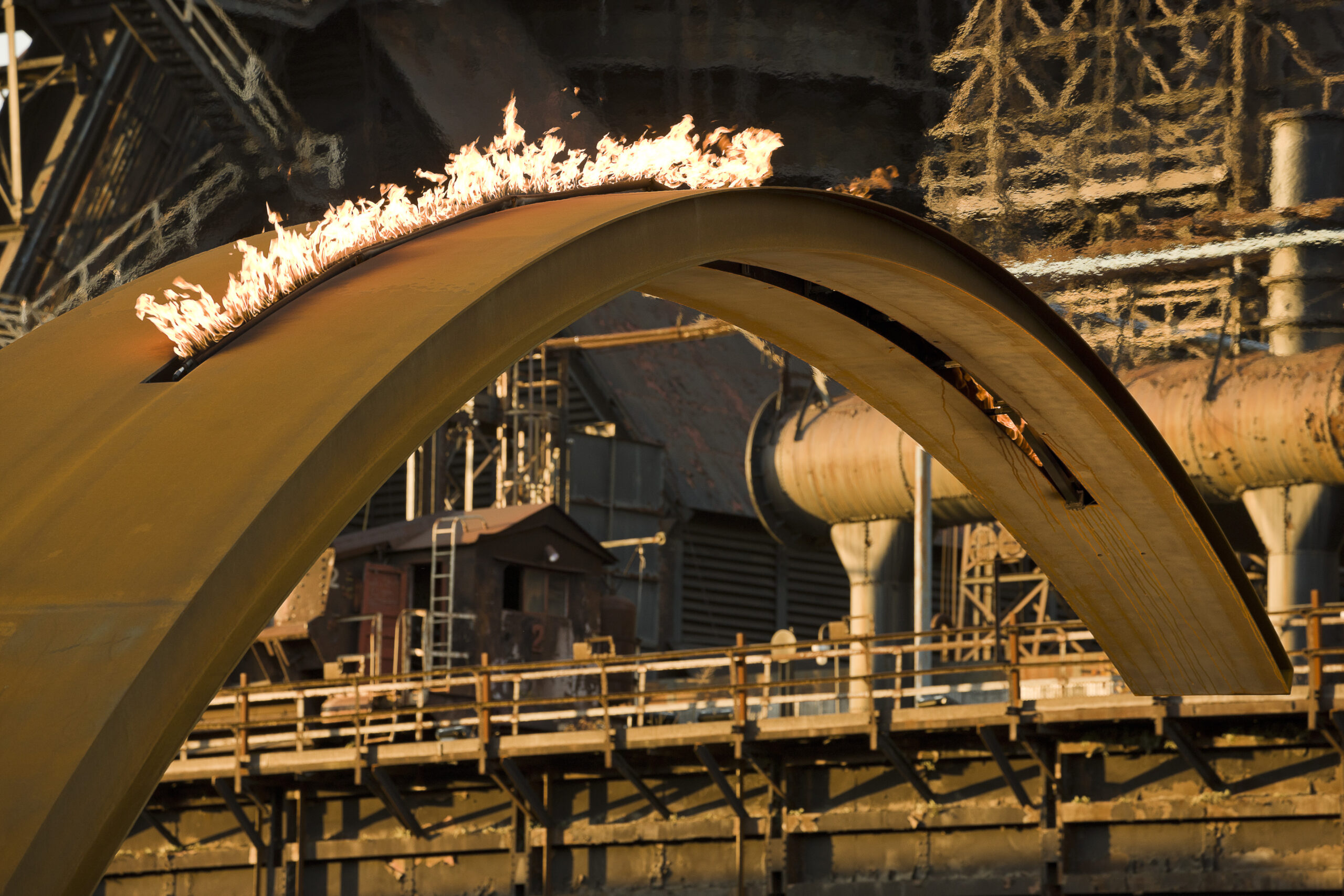 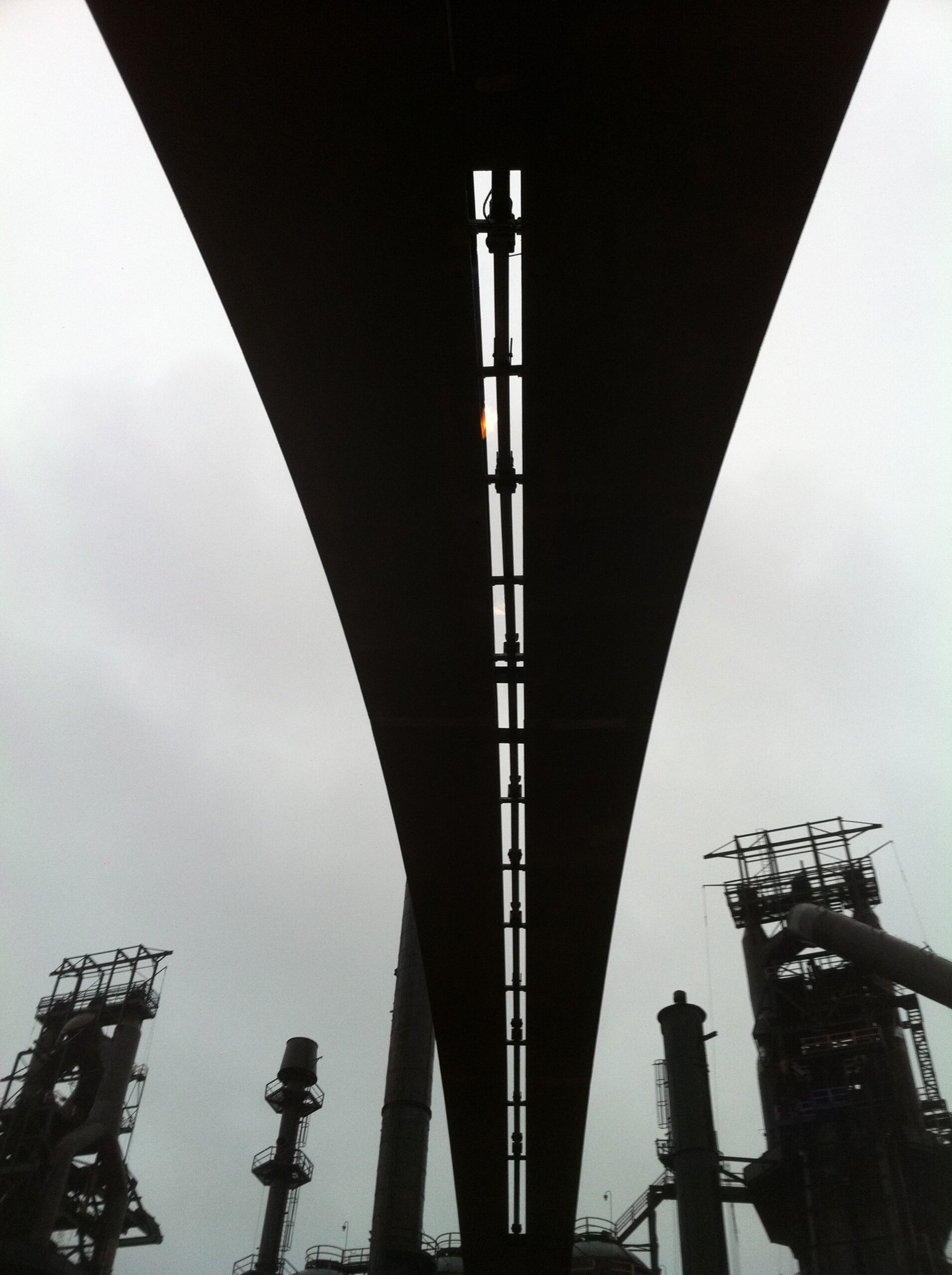 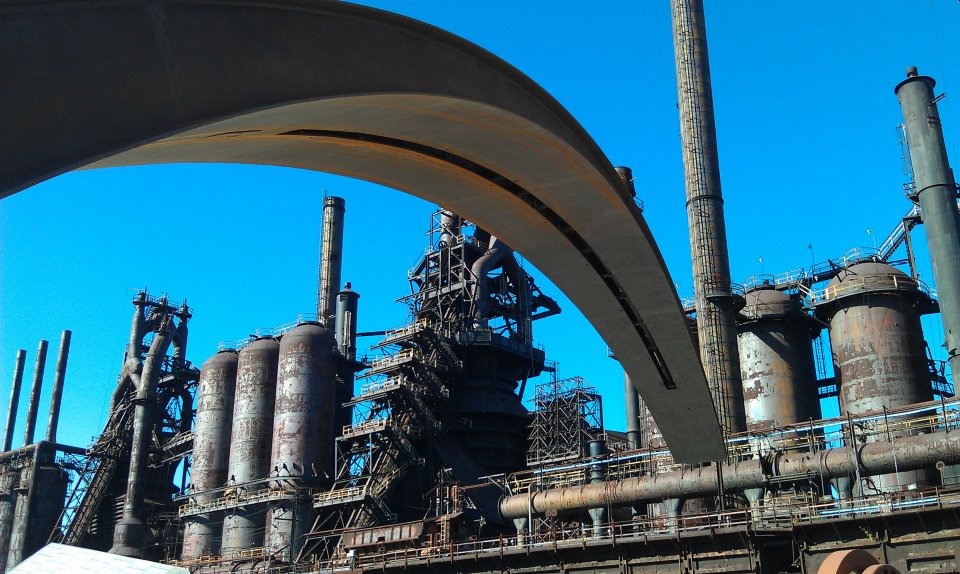 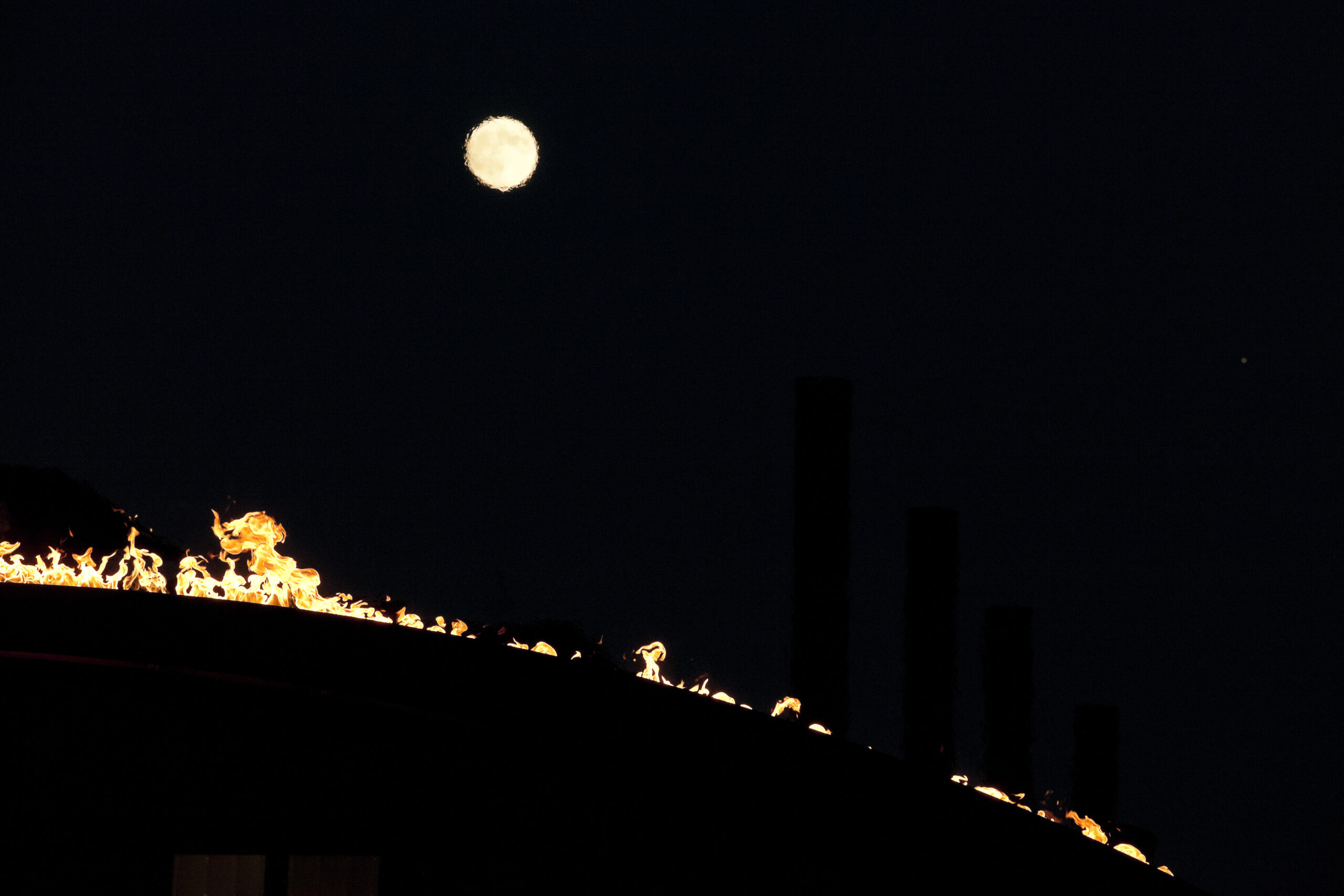